Should You Wear RED Shorts? 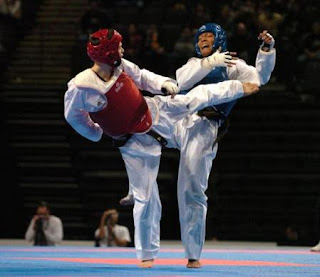 This "clip" comes from our friends at ScientificBlogging.com

Many sports teams select their uniforms based on the mascot, city or country they are representing and not on a referee’s preference or bias but a new study has found that choosing the color red for a uniform in competitive sports can actually affect the referee’s split-second decision-making ability and even promote a scoring bias.

Psychologists Norbert Hagemann, Bernd Strauss and Jan Leiβing from the University of Münster specifically found that referees tended to assign more points to TaeKwon Do competitors dressed in red than those dressed in blue. The researchers presented 42 experienced tae kwon do referees with videos of blue- and red-clad competitors sparring. The two sets of clips were identical except that the colors were reversed in the second set, making the red athlete appear to be wearing blue and vice versa. The referees were then asked to score the performance of each competitor, red or blue, after each video.

The psychologists found that when the competitors appeared to be wearing red, they were awarded an average of 13% more points than the blue competitors, even though every athlete was presented in both colors at some point. What’s more, points awarded seemed to increase after the blue athlete was digitally transformed into a red athlete and decrease when the red competitor changed to blue.

The findings, which appear in the August 2008 issue of Psychological Science, suggest that referees may hold a split-second bias toward red-clad athletes when the competitors are evenly matched in skill: “Referees’ decisions will ‘tip the scales’ when athletes are relatively well-matched but have relatively small influence when one is clearly superior,” wrote the authors.

“Although there is a need for further research, including research on the effects of different colors, our results suggest a need to change the rules or support referees by providing electronic decision-making aids in those sports in which this color bias may be a problem,” they concluded.
Posted by Dr. Randy Borum at 10:30 AM