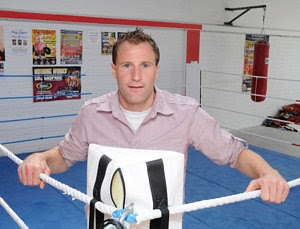 Yesterday's Olympic first round clash was the fourth championship bout between the light welterweight rivals, with Kate winning the previous three.

But Joyce, 20, showed marvellous composure and used a clever attack plan to claim a deserved 9-5 win and progress through to the last 16, where he will face Felix Diaz of the Dominican Republic.

Hussey, a former amateur boxer who has been the Irish High Performance boxing team's psychologist for the past three years, certainly has a fan in Joyce.

'When Gerry is around, I always do well. I lack self belief sometimes but he looks after all that side of my performance,' said the Mullingar youngster.

'He could not get in here to be with me (today), but he has been working with me in the training camp and the Olympic Village and that preparation really paid off.

'I showed in the ring I was believing in myself and, once I believe in myself, I will perform to my potential and then I can do anything.'

No stone has been left unturned with Hussey, who runs Alpha 1 boxing gym in Galway, even showing the Irish fighters a walk-through DVD of the Olympic Village before their arrival in Beijing.

The Glenamaddy native has helped the Irish team develop psychology systems and techniques in many areas, from building self esteem and self belief to developing communication and relaxation techniques.

And Joyce warned anyone standing in his way of a Beijing medal that with his so-called 'bogey man' out of the way, he will only get better.

'I know the longer a tournament goes on the better I get, and that's why I was hoping for a good draw.

'I didn't get it, I got the toughest draw I could have got really because of the respect I have for Kate.

'To have finally beaten this guy will help my confidence. He has been my bogey man in the past. I hope that's the end of him.

'I'm not looking beyond the next fight right now and as a team we're just delighted that we've the two wins from two with Kenny (Egan) winning on Saturday as well.'

Hi, I'm a psychology student for Miami Dade College and I'm making a research in Combat Sports Psychology. Could you recomend me a web page to find info about it? specially about the branch's history.
Thank you.

A sport psychologist is needed in every athletes for them to be motivated and encouraged.
Sports Psychology

Hi,Ronald Johnson Boxer best option to start a boxing workout is to enlist in fitness boot camps. As this sport is always perceived to be high intensity cardiovascular activity, Ronald Johnsonit is always included in the boot camp programs. They also offer variations in the boxing exercise that are tailored according to health and fitness level. Boxer
Boxing
Ronald Johnson Boxer