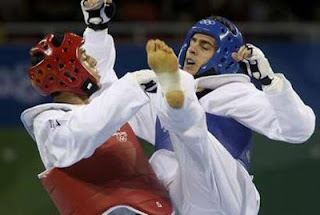 Italy's Mauro Sarmiento, the eventual silver medalist, defeated Lopez in sudden-death overtime in the quarterfinal round. When Sarmiento advanced to the finals, Lopez was entered into the repechage for one of two bronze medals. Lopez defeated Sebastien Konan from the Ivory Coast, 3-0, and then defeated Azerbaijan's Rashad Ahmadov for the bronze medal, 3-2. 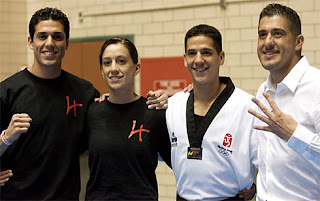 BEIJING (AP) Since about as long as she can remember, Diana Lopez has been fighting with her three brothers. Not just little skirmishes or disagreements over bathroom rights, but the all-out, kick-and-punch kind of fighting.

Her parents encouraged it. In fact, it was their dad's idea. And it all seems to be working out pretty well.

The fighting Lopez family - Diana and her older brothers Mark and Steven, with eldest sibling Jean as their coach - are the first trio from the same family to represent the United States at the Olympics since 1904.

They made history when they each won their weight class at the 2005 world taekwondo championships - a feat no three siblings had ever accomplished in the same sport in the same year. Now, having all made the U.S. team, they are making their first appearance together in the Olympics and are ready to make history again.

But the Lopezes are all gold medal contenders.

"I feel like it is almost unfair," said Steven, who at 29 already has two Olympic golds and four world championship titles. "It's like when we go into the ring, it's four to one."

Coach Jean, himself a silver medalist at the 1995 world championships, said fighting comes naturally in his family.

"We have a combative nature," he said. "Taekwondo is just man-against-man, or woman-against-woman, and I think that is what captivated us."

Jean said the family found taekwondo, a Korean martial art that is focused on fast, high kicking, by chance.

His father, Julio, had always liked kung fu movies, and there was a martial arts school just down the street from their house.

"It just happened to be taekwondo," he said.

Jean was soon hooked, and the others were enrolled by their parents not so much as a sporting activity but to instill in them discipline, respect and confidence.

Now, they have helped put taekwondo on the U.S. sports horizon. Steven, for example, was named one of People magazine's hottest bachelors for 2004 - not a common honor for an athlete from an event many Americans still can't pronounce.

By the time they were teens, sparring was a part of life. But fighting in the ring, when it's a family matter, has some different rules.

"My brothers take it easy on their baby sister," said Diana, who will compete in the under 57-kilogram division on Aug. 21. "But I can kick as hard as I want."

"Sometimes she'll graze my face, and I'll think, 'Hey, I just got kicked by my sister,'" said Mark, who also fights on Aug. 21, in the under 68-kilogram class. "It reminds me to try to kick faster."

To train for the games, the Lopez family - along with Charlotte Craig, the fourth member of the U.S. team - spent 10 days in Singapore getting acclimatized and, more importantly, getting used to being away from their home in Sugar Land, Texas, where Jean runs the Elite Taekwondo school.

To save money, Diana and Mark shared a room.

"That was kind of weird," Diana said.

Though Steven has cause to be confident - he hasn't lost a bout since 2002 - the road to gold for Diana and Mark will tough. Both will be fighting against South Korean opponents, and South Korea has never failed to get at least a bronze out of the eight competitors it has sent since taekwondo joined the Olympic roster in 2000.

"The Korean team is a very strong team," Diana said. "Korea is very good at being technical and efficient. But Mark and I make it a fight. We are very confident, and we know our job."

No Koreans are in Steven's weight category, the under 80-kilogram class. Instead, he said that he expects his toughest competition to come from Turkey and Iran.

But he isn't especially worried - for himself or for Mark and Diana.

"The goals, our expectations, are to go out there and win gold medals," he said. "In my opinion, they are ready. This Olympics is very special to us because we will be walking into the opening ceremony as a family."

Mark, 26, was even more confident.

"We are here to make a statement," he said. "We are the best in the world."

I like taekwondo, but I prefer shaolin kung fu and wing chun