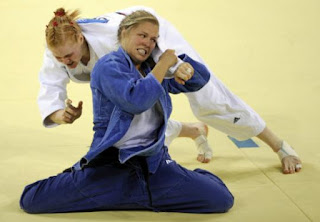 A few minutes after Ronda Rousey became the first American woman to win an Olympic medal in judo, she was asked what she would do next.

"What am I gonna do?" she repeated. "As of right now I am a vegan. I put that off until after I was done with this tournament."

"And then I'm gonna go home and I'm probably gonna take over the loan on my step-dad's Prius and I'm gonna drive a clean car," the bronze medalist continued. "And I'm gonna get a surfboard and learn how to surf, teach myself. I made up this long list of stuff that I couldn't do while I was training that normal people do. It's kind of too late to go to prom, but you know, I'll find something to make up for it."

Rousey's history-making day in the 70 kg competition was marked by a thoroughly odd mix of drama and comedy. At one point she dissolved in tears after losing a meeting with 2005 Dutch world champion Edith Bosch. A reporter later asked her how she recovered from that disappointment to rally in the loser's bracket; "I drank an iced tea," she said.

After her win by yuko in the bronze-medal match, she handed out enthusiastic hugs to every coach on her team; she was later asked to describe her winning throw.

"Don't ask me about terminology, I'm horrible," she said. "You're supposed to learn all that stuff to get promoted, but I never did."

She talked happily about her plans to go out in Beijing tonight, and then ran off to get the flag that was placed on her father's coffin after he committed suicide while battling a blood disorder 13 years ago this week.

None of her quirks are exactly hidden, thanks to her blog, where she has revealed that she sleeps with a stuffed ewe, is turned off when she can beat up a guy easily, looks like Julia Styles Stiles, dances naked in her living room every morning and eats imitation crab meat like string cheese. Her mom--a former U.S. world champion judo player with a PhD in education psychology--has a blog too.

"We're kind of a geeky tech family," AnnMaria De Mars said. "When I married Ronda's dad, instead of an engagement ring he got me an engagement Macintosh."

And then there's the vegan MMA thing. A reporter asked De Mars how a vegan lifestyle would squared with a violent sport like judo; "I mean, we're tough but we don't kill our opponents and eat them," she pointed out.

Rousey, 21, plans to take a year off from competition to try out college, at either Southern Cal, Pepperdine or Loyola Marymount. She said she still might try to return for the 2012 Olympics. Of course, several of Rousey's close friends from the competitive judo world have gone into mixed martial arts--Manny Gamburyan and Roman Mitichyan, for example--and they've asked her to try that as well. She's thinking about it.

"I might learn how to throw a punch, but I'm not making any promises," she said. She was asked whether she'd have the guts for that brand of fighting; "look at my face, does it look like I can take a good hit right now?" she replied, pointing to her red and battered cheeks.

"She's really smart, see that's the thing," she said. "I think if you're really really smart and you could maybe discover a new drug that cures AIDS or something you should go and do that, and let other people punch each other in the face."
Posted by Dr. Randy Borum at 9:33 PM

I think women learn kung fu will be good to protect herself.