When the Going Gets Tough, The Tough Get Mindful 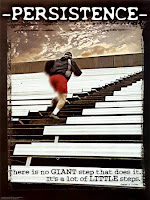 When the Going Gets Tough,
The Tough Get Mindful

How do you persist on a demanding and difficult task? Conventional wisdom often says to suck it up and tough it out, but new research from psychologists at University of Kentucky could argue for a very different approach.

Daniel Evans and colleagues wanted to understand what effects a practice called mindfulness might have on persistence. Mindfulness has become a popularly studied intervention within the past decade, and has shown significant success in reducing stress and psychological distress. The concept is simple, but it usually takes some practice to master.

The essence of mindfulness is learning to be quietly focused in the present moment- the “here and now” - while non-judgmentally observing – and not reacting to - your perceptions, sensations, thoughts and emotions.

Researchers got 142 psychology students to work on a series of word puzzles within certain time limits, but the first of the puzzles did not have any real solution. This created a situation where they were supposed to persist on a task, even after finding the first attempt to be impossible.

Learning not to judge or evaluate (nonjudging) and not to react (nonreactivity) to what’s going on inside you is the tricky part of mindfulness, but they are vital ingredients, according to the study. The better the subjects were in not judging or reacting, the more persistent they were. Researchers found the subjects were aware of what they were experiencing – positive and negative – but their mindful stance allowed them not to be self conscious about it.

Some researchers believe that people need to be self critical to motivate them to persist toward a goal. This research suggests otherwise. Those who were internally aware but self-conscious – focusing on the discrepancy between how they are doing and what they want to achieve – were less persistent. The researchers conclude the mindfulness may be a promising strategy for self-regulating behaviors, thoughts and emotions.