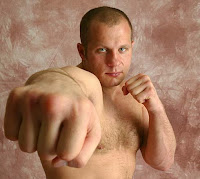 (Article First appears in Black Belt Magazine, May, 2009)
“How do I get rid of the jitters before a fight (or match)?” – That is probably the single most common question that martial artists ask me. I sense that many are looking for a dose of magic or a quick fix – particularly because they raise the question within 24 hours of their scheduled competition. Sometimes there are stopgap measures that will help you get over a particular psychological hurdle, but with just a little advance planning you can make a big long term difference.

Let me begin by trying to clear up a few misconceptions about pre-competition jitters. First, all marital arts competitors – including mixed martial artists – should know that feeling nervous is completely normal and it does not necessarily mean that you will perform badly. In the world of MMA, the fighter probably best known for calmness in the cage is Russia’s Fedor Emelianenko. Consistently ranked as one of the World’s top heavyweights, Fedor saunters into the cage like it’s just another day at the office. During interviews, he is often asked about his stoic demeanor and he freely admits that he gets nervous before fights (as he believes all fighters do), but he has refined a strategy that works for him to control it.

This leads me to address a second misconception – that there is one ideal state of pre-competition calmness that works for everyone and that everyone can get there in the same way. Sometimes we are led to believe that buying the right program, listening to the right motivational CD, or reading the right book will allow anyone to achieve their optimal performance state. My experience suggests that different competitors experience jitters in different ways, for different reasons, and have to find a management strategy that works with their specific needs and style. Their optimal states of arousal or intensity also vary quite a bit. So Fedor’s state of mellow composure works very well for him, but it could be disastrous from someone else.

So, here’s the starting point for our discussion: if you get nervous jitters before a fight, “good for you” – you’re in very good company. There probably is not a “one size fits all solution”, but there are some fairly straightforward, battle-tested strategies and approaches you can use to find what works best for you. Here’s how you might begin:

First, try to understand how your jitters work. Typically, pre-competition anxiety can appear in your physical sensations (e.g., rapid breathing and heartbeat, sweating, muscle tension, butterflies), your emotional state (e.g. “feeling” nervous or fearful) and your thoughts (e.g., things you are saying to your self, negative thoughts, self-doubt). Write down what kinds of jittery experiences you have in each of those three areas before a competition. Then – as best you can determine – make a note about when they occur, how severe they are, and how much you think each interferes with your performance. Part of the task here is to figure out what “triggers” and patterns you can identify. Try to discern your earliest indictors or warning signs, then run through the progression. Ask yourself: “What comes first?”, “Then what happens?” until you understand the usual sequence.

Second, be proactive by preventing the jitters before they start, and deterring them at the earliest stages. Part of anxiety’s potency comes from its ability to sneak up on you and to build momentum. Because the human brain tends to default to a negative state (see Psyched column in the December, 2008 issue), unless you are being proactive, then you are increasingly vulnerable to the jitters’ destructive effects. You don’t realize you have been overcome by anxiety until it’s too late.

Being proactive here means intentionally orienting your thoughts, feelings and body in a positive direction. To do this with your thoughts, you might try writing down a few first person statements about your strengths, skills and preparation (e.g., “I can take down my opponent at will”). Read them to yourself at different intervals at least four times a day. These are the positive thoughts that can be occupying your mind. To orient your mood or emotions, you might try mental imagery or visualization. Observing yourself and experiencing the feeling of being successful in executing moves and techniques against an opponent. Reflect on past successes in training or competition to re-connect with that feeling of confidence and mastery.

Proactively creating a positive physical state involves two different tasks – first knowing your optimal state of intensity for competition and then being able to regulate your body’s response accordingly. A Zen-like state of tranquility may or may not work for you. Some competitors prefer to go in at a fairly high state of intensity, which is fine as long as it is controlled and energy is not being unnecessarily wasted. But know what has worked best for you in the past (or, if you are just beginning, what is most likely to work for you) and try to keep yourself within an optimal zone. That’s where self-regulation comes in: Learning to ramp up or down as needed. For most people, firing up is not the main challenge, but rather it is handling the “adrenaline dump” that happens at show time. Using deep breathing and progressive muscle relaxation – particularly after a bit of practice – can help you transition from a state of anxiety to a state of readiness.

If you do this successfully, does this mean that you will never again feel nervous? No, and that’s not the objective. The point is keep the jitters from hindering your performance and to facilitate a state of optimal performance. As you become more aware of your early warning signs, you can take a few minutes and re-center yourself before the nerves spin out of control. One useful tip is to remember that the thoughts, feelings, and physical reactions are all connected to each other. If you are getting jittery in one area – like getting negative thoughts - you can respond not only by invoking your positive thoughts, but also by calming your body. It might then be easier for your mind to focus on the positive thoughts and it will take some of the sting out of those doubts. A number of elite-level fighters I know feel jittery before a match, but in their minds, they interpret or label it as “energy”, “excitement”, or a signal that they are “ready to go.” Sometimes the jitters just need to be put in their proper place.