Anger and Fighting in Competition 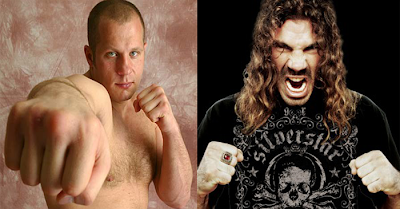 Editor’s Note: This blog has been a bit dormant for a while, but apparently some people are still discovering and finding it useful. I thank you for your kind comments. Despite our low activity, we were recently named among the “Top Martial Arts Sites” by The MMA Zone. I was grateful and honored by the recognition and thought I would try to revive the site - if only temporarily– until reality sets in again. So, here goes… Paddles…. CLEAR … BEEEEEEP…

Optimal arousal (heh, heh… you said “arousal”, heh, heh) is a key to performing effectively in competition. But what is “optimal”? Excellent question. Some of you might remember the old “Inverted U” hypothesis. In psychology books, it is known as the Yerkes-Dodson Law. The basic idea is that anxiety (or physiological arousal, more generally) in small to moderate doses tends to help competitive performance by accelerating your drive and energy. But at a certain point, arousal becomes too high and it begins to impair performance. When arousal is working for you, that’s being in “the zone.” Crank it up past that point, and the upward line in the upside down “U” begins to turn downward. Pretty basic.

But if you watch combat sport athletes, you’ve probably noticed an incredible range in emotional intensity – even among the winners. That seems to defy the idea that there is one optimal point for everyone.

An alternative to the Inverted U is the Individual Zones of Optimal Functioning -or IZOF model. The IZOF model suggests that “the zone” of optimal emotional and physiological intensity varies for each individual athlete. One of the areas where I’ve seen this most clearly with fighters specifically is in how they handle or use anger.

Anger generally tends to charge your arousal level. Your thoughts are racing. Your body is revved up. And your emotions are running high. Is that a good thing? That depends. It depends on who you are and how you handle it. I remember chatting with one young fighter – a super nice guy who was not naturally aggressive - saying how he was trying to work himself up to “hate the guy” who he was opposing in the cage. He thought that he needed hate and anger to tap into his inner barbarian .. or something like that.

Anger can sometimes generate drive and energy. But it can also sometimes drain it. And it will often overshadow the part of your brain responsible for anticipation, planning and strategy. So there can be a steep cost as well.

Recently, researchers in Finland took a look at how anger affected the performance of 20 high-level (international) competitive karate athletes. They measured the athlete’s expression of anger and asked them to recall their best and worst competitive performance – before during and after. As the IZOF model would predict, responses were all over the map. Just over half had low anger in their best and their worst performances. For these competitors, anger was neither a handy tool nor an impediment.
Another group tended to notice a rise in anger intensity in their worst performances – more so in the pre- and post-fight situations than in the competition itself. What did seem to make a difference was the athlete’s ability to regulate or control his or her level of anger intensity and perceiving that he or she had enough coping resources to deal with the stress and frustrations of competitive adversity.

Here’s one way to look at these results: When you can selectively summon and carefully control your anger, you can use it as an energizing resource. But when anger is prompted by an opponent, it may signal to your brain that you are in trouble making it worry that you don’t have enough resources to cope. Becoming angry may be different than allowing an opponent to make you angry. When you react with anger you give up a measure self-control. You may get a boost of intensity, but you may also be more prone to tactical and strategic mistakes. Know yourself.

Yes, I think this blog is one of the best on this topic on the web! Also, this is such an interesting topic for your post. I think anger plays a huge motivation for training and while in the fight itself. I would like to see some studies on combat sports and anger. Keep up the great Work!

I feel that every sports (or exercise minded) person and their coach or instructor, should have a basic knowledge of sports psychology. The more athletes that get 'in the zone' the more enjoyable, successful and long-lasting their participation will be.

Nice Article
Read This article too
A star field has not always been a brilliant life like their action while playing in a match. Some famous players and coaches involved in a scandal affair precisely when they are at the peak of their careers. Here are ten prominent figures in world football has ever tripped cases of infidelity.

10 Football Stars Who Ever Involved in Infidelity Scandal

A star field has not always been a brilliant life like their action while playing in a match.beautiful post..thanks for sharing here..Treadmill India

Good article, I agree with the theory of people having their own optimal levels of anxiety. Look at George St. Pierre, he fights every fight extremely nervous, and always performs. On the other hand, Anderson Silva, looks like he's ready for a nap when he fights. Both fighters obviously have good results. I my self find that the more calm I am in a fight the better I do in competitions. I have recently even adopted the practice of sleeping in the warm up room until my division is called. No point in warming up any ways. with the amount of time between matches in a jiu jitsu competition, you cold by the time you're fight any ways.

I am the author of "The Art of Western Tai Chi Ch'uan" gives a more comprehensive explanation of the subject matter this article. please pick it up on amazon.com and if you wait until spring ... the 2nd edition will be released...

Keep the balls rolling!! Nice posts you have given for us.Dr Robi Ludwig

Learn to flow like river, that's how to heal your anger
www.bellofpeace gede prama org

Learn to flow like river, that's how to heal your anger
www.bellofpeace gede prama org

It's cool, and I think taichi will help you to control your anger.

I found it when I was looking for a different sort of information but I am very interested in these blog..
Sports Tape Australia