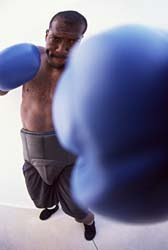 Anticipating Your Opponent’s Action
By Dr. Randy Borum
(Article published in Black Belt Magazine, February, 2009)
Imagine while sparring, your opponent repeatedly uses a double jab to close the distance on you before throwing a straight right to your chin. Again, he moves forward with a jab. Your hands go up to defend. He begins to throw another, but this time he changes levels and delivers a left hook below your lower ribs – a liver shot.

You were paying attention. You were watching your opponent’s patterns. What happened? Successful deception and failed anticipation.

Anticipation is like prediction. It relies on your ability determine what it about to happen. It is also a sport-specific perceptual skill. In combat sports, your defensive expertise depends on how well you anticipate what you opponent is going to do; how wisely you choose the best response; and how well – and how quickly - you execute the action.

Blocking an opponent’s punch, for example, is actually the end result of an extraordinarily complex psychological process. Saccadic eye movements rapidly scan multiple possible cues in a dynamic, moving opponent. The eyes fixate – or pause – on one or more cues that might signal an opponent’s intention. The visual system puts those cues in context to perceive depth, speed, and trajectory, sending those signals to relevant areas of the brain to interpret them. The brain discerns what kind of actions the cues might signal, then chooses the one that seems most likely. The brain generates a corresponding menu of responses, and chooses the best one for the situation. Then, it sends the necessary chemical and electrical messages through the nervous system to execute that response. Before you get hit, of course.

Deceptive actions – such as feints – are cues that signal one action, when something else is actually intended. Deception, for centuries, has been a cornerstone of warfare strategy and martial art tactics. Martial arts Master, Yoshinori Kono even describes the classical Japanese martial arts as a form of "perceptual warfare."

Sport psychologists have studied how anticipation works in motor skills and athletic endeavors. Often these studies compare expert performers with novices to figure out what causes some people to be better than others at countering an opponent’s moves. Speed and quickness obviously have something to do with anticipation expertise, but it’s not just about reaction time. A number of studies have found that simple reaction time - the time needed to respond to a target cue – is fairly similar for experienced and beginning practitioners. But defending in marital arts requires more than a fast reaction time, right?

To anticipate an opponent’s attack, we must know what kinds of cues to look for; to be able to see them; and interpret what the signals are likely to mean. Visual acuity is needed, but not just good eyesight. Dynamic visual acuity – the ability to accurately perceive objects in motion – is a must. Visual search behaviors also play a key role. These are the patterns and speeds at which your eyes scan and fixate on particular cues. Once your eyes fix on something, your focal field of vision narrows to about a three degree angle. You have to rely a lot on peripheral vision, particularly to detect movement. Finally, there are the cues themselves - what are you looking for? Again, research shows that experts and novices are often not looking at different cues.

What seems to matter most in sport-related perceptual expertise is not good eyesight or necessarily what they see, but how the person uses the information they perceive. In martial arts an opponent’s postural cues provide some of the best information about his intention. But learning which postural cues are going to signal which attacks mostly occurs through sport-specific experience. Sometimes this learning is acquired by understanding the biomechanics of the general technique, but sometimes it comes by discerning patterns within a specific opponent.

What tends to distinguish experts in the perceptual warfare of martial arts is the ability to anticipate how an opponent’s cues relate to his intentions. In the terminology of sport psychology, they have superior anticipatory skills. More experienced practitioners tend to be able to identify an opponent’s attack and defense patterns much more quickly, easily, and accurately than their beginner counterparts. They have learned from experience which actions are most likely to follow which cues. They also adapt that knowledge to what they observe in their present opponent. In the language of the sport scientist, they have superior response selection performance, which makes for better tactical decision making.

How do you improve your perceptual expertise? Practice, mostly. What is most helpful, though, is practice with feedback. Get feedback from your sparring partner and from an observer about how you may be telegraphing your actions.

High-tech solutions are also available. Sport psychologist Joan Vickers at the University of Calgary has developed a training program called “Quiet Eye” to enhance gaze control, perceptual expertise, and decision-making. They use a wireless, spectacle-mounted eyetracker, with software that can precisely gauge your eyes’ movement and direction. You can see where your eyes are really going, not just where you think they are. Vickers’ decision training program is based on identifying the primary cognitive skill needed for a sport-specific decision task, designing drills that use cognitive triggers for that skill, and using certain tools and methods to train the decision in competitive context.

If you are looking for a low-tech introduction, you might use your light sparring sessions as a way to experiment. Choose a particular time period - maybe one or two rounds - where you will focus on learning to anticipate your opponent. As a general rule, you don’t want to be this analytical and “inside your head” when you’re standing in front an adversary, but you can carve out a time for this exercise. Give yourself a couple of minutes afterwards just to reflect on what you observed and what you learned, then go another round. Use that round as a way to test the hypotheses or theories you developed about your opponent’s cues. See what works. Afterwards, reflect again for a couple of minutes, trying to visualize specific patterns and cue in your head. Then, turn off the analytic switch and try flow sparring for a round or two. Don’t consciously focus on patterns and cues this time or try to give yourself any instructions. Just allow your new learning to settle and to flow.

And watch out for that body shot.
Posted by Dr. Randy Borum at 4:02 PM