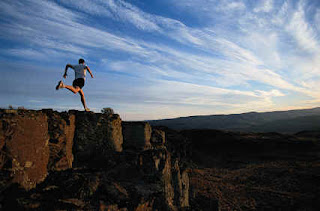 New scientific data supports the endorphin-releasing process that has long been hypothesized to follow intense bouts of exercise. The term "runner's high" was once considered folklore by some scientists, but an article published in the March issue of the journal Cerebral Cortex may prompt non-believers to adjust their thinking.

After completing a challenging, lung-burning workout, many runners and cyclists describe having a feeling of euphoria or a sense of calm that drapes their minds and bodies. Commonly called a “runner’s high,” scientists have hypothesized that running or intense physical activity can elicit a flood of endorphins in a person’s brain, producing analgesia and a general sense of well-being. Though it has long been accepted in the athletic world, the biochemical mechanism behind a runner's high has previously been elusive.

Now, for the first time, the theory of the runner’s high is backed by scientific data collected by researchers in Germany using positron emission tomography (PET) scans and newly available chemicals that reveal endorphins in the brain. In addition to proving how and why runners reach a euphoric state, their research could have even wider-ranging effects as these findings reach into the medical community, helping physicians understand the relationship between exercise and chronic pain.

Despite having countless athletes buy into the idea of runner’s high, many scientists have long been unconvinced by anecdotal accounts. Instead of an endorphin rush, many thought that a runner’s high was simply a byproduct of the mental good feeling that accompanies a sense of accomplishment, in this case, completing strenuous physical challenge.

But in March, researchers published an article indicating that when athletes are pushed beyond a threshold of intense physical activity, it can provoke a release of endorphins. The scientists, who work in the fields of Nuclear Medicine, Neurology, and Anesthesia at the Technische Universität München (TUM) and the University of Bonn, scanned the brains of 10 athletes before and after a two-hour run. Their data showed that athletes produced endorphins during workout and that those endorphins attached themselves to the limbic and prefrontal areas of the brain, which are associated with controlling a person’s emotions.

"We could validate for the first time an endorphin driven runner's high and identify the affected brain areas,” Professor Henning Boecker, who coordinated the research at TUM and who is in charge of the Functional Neuroimaging Group at the Department of Radiology at University Hospital Bonn, told the online magazine, Science Daily. “It’s interesting to see that the affected brain areas were preferentially located in prefrontal and limbic brain regions which are known to play a key role in emotional processing. Moreover, we observed a significant increase of the euphoria and happiness ratings compared to the ratings before the running exercise."

Professor Thomas Tölle, who heads a research group called Functional Imaging of Pain at TUM, says these results could unearth another tool in the battle against chronic pain.

“The fact that the endorphins are also released in areas of the brain that are at the center of the suppression of pain was not quite unexpected, but even this proof was missing,” Tölle told Science Daily. “Now we hope that these images will also impress our pain patients and will motivate them to take up sports training within their available limits.”

Boecker is investigating these possibilities as part of a follow-up study about whether running affects pain perception. Using PET scans to monitor 20 marathon runners and a similar number of nonathletes, Boecker is studying the test subjects’ perception of pain after running and walking.

One of Boecker’s goals is find out whether intensity of exercise affects levels of endorphins. By including nonathletes in the study, Boecker is looking at whether a love of exercise has anything to do with endorphin production.

“There are studies that showed enhanced pain tolerance in runners,” Boecker told the New York Times. “You have to give higher pain stimuli before they say, ‘OK, this hurts.’ ”


R.J. Anderson is an Assistant Editor at Training & Conditioning. He can be reached at rja@momentummedia.com
Posted by Dr. Randy Borum at 1:27 PM

I don't know if runners high is real or not but I do have moments where I can run almost 4 times further with the same intensity without feeling tired. It doesn't happen often but when it happens, you'll know it. I notice when I'm in this state, I'm not focusing on running, it feels like 95% of my focus is on my surroundings and having a positive attitude. The best treadmill runners high is when you're watching a favorite show or movie. You simply forget that you're actually running and the feeling of 'oh my I ran X miles, I SHOULD feel tired'